Book 3 in the Seduced into Sharing series is out now. This time Holly and Luke invite Amber’s friend Luke to join them: Holly is about to try her first double penetration!

Is this a step too far? At first, Nick thinks so, and it takes all of Holly and Amber’s powers of persuasion to convince him they should try it. When they do though, a night of foursome fun is on the cards! By the end of it, Nick has watched Holly have sex with another man for the first time ever, and together, they’ve enjoyed their first MFM and MFFM action.

This is the third instalment in the Seduced into Sharing series and Holly and Nick’s journey of sexual discovery has reached a whole new level of adventurousness! Their life of swinging and sharing is about to begin!

Here’s a link to the Amazon page: getbook.at/ThreeToFour 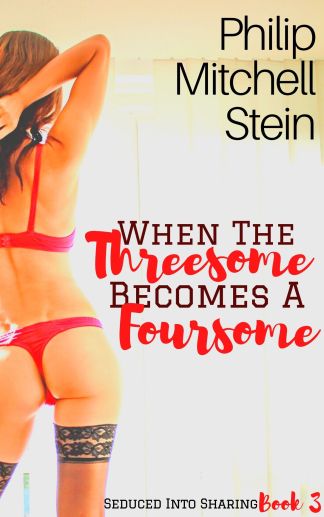